Tintagel or Trevena (Cornish: Tre war Venydh meaning village on a mountain) is a civil parish and village situated on the Atlantic coast of Cornwall, England, United Kingdom. The population of the parish is 1,820 people, and the area of the parish is 4,281 acres (17.32 km2). The village and nearby Tintagel Castle are associated with the legends surrounding King Arthur and the knights of the Round Table. The village has, in recent times, become attractive to day-trippers, and tourists from many parts of the world, and is one of the most-visited places in Britain.

The modern-day village of Tintagel was always known as Trevena until the Post Office started using ‘Tintagel’ as the name in the mid 19th century (until then Tintagel had been restricted to the name of the headland and of the parish). The village also features the ‘Old Post Office‘, which dates from the 14th century. It became a post office during the nineteenth century, and is now listed Grade I and owned by the National Trust.

In Norman times a small castle was established at Bossiney, probably before the Domesday Survey of 1086; Bossiney and Trevena were established as a borough in 1253 by Richard, 1st Earl of Cornwall. In Domesday Book there are certainly two manors in this parish. Bossiney (which included Trevena) was held from the monks of Bodmin by the Earl of Cornwall: there was land for 6 ploughs and 30 acres (120,000 m2) of pasture (before the Conquest it had been held from the monks by Alfwy). The monks of Bodmin held Treknow themselves: there was land for 8 ploughs and 100 acres (400,000 m2) of pasture.[6] Tintagel was one of the 17 Antiqua maneria of the Duchy of Cornwall. The parish feast traditionally celebrated at Tintagel was October 19, the feast day of St Denys, patron of the chapel at Trevena (the proper date is October 9 but the feast has moved forward due to the calendar reform of 1752). The market hall and the site of the fair were near the chapel.

The borough of Bossiney was given the right to send two MPs to Parliament ca. 1552 and continued to do so until 1832 when its status as a borough was abolished. The villages of Trevena and Bossiney were until the early 20th century separated by fields along Bossiney Road. The Tithe Commissioners’ survey was carried out in 1840-41 and recorded the area of the parish as 4,280 acres (17.3 km2), of which arable and pasture land was 3,200 acres (13 km2). The land owned by the largest landowner, Lord Wharncliffe, amounted to 1,814 acres (7.34 km2), and there was 125 acres (0.51 km2) of glebe land.

On 6 July 1979, Tintagel was briefly subject to national attention when an RAF Hawker Hunter fighter aircraft crashed into the village following an engine malfunction. The unusual incident caused significant damage and consternation, but no deaths. Treknow is the largest of the other settlements in the parish, which include Trethevy, Trebarwith, Tregatta, Trenale and Trewarmett.

The coastline around Tintagel is significant because it is composed of old Devonian slate; about a mile southwards from Tintagel towards Treknow the coastline was quarried extensively for this hard-wearing roofing surface. Quarries inland at Trebarwith and Trevillet continued to be worked until the mid 20th century. Apart from the Island headlands on the coast include Willapark and Start Point.

The turquoise green water around this coast is caused by the slate/sand around Tintagel which contains elements of copper: strong sunlight turns the water a light turquoise green colour in warm weather. The rocks contain various metal ores in small amounts: a few of these were mined in the Victorian period.

Though very near the coast the hill of Condolden (or Kingsdown) is among the very few areas in Cornwall outside Bodmin Moor which exceeds 1000 feet.[43] At Trethevy is the waterfall known as St Nectan’s Kieve in a wooded valley. The beach at Bossiney Haven is close by and Trebarwith Strand, just half an hour’s walk south of Tintagel, is one of Cornwall’s finer beaches, boasting clear seas, golden sands, and superb surf: there is a small beach at Tintagel Haven immediately north of the castle. The voluntary life-saving club is based at Trebarwith Strand and also has members from Boscastle, Camelford, etc.

The cliffs from Backways Cove, south of Trebarwith Strand to Willapark just to the south of Boscastle are part of the Tintagel Cliffs SSSI (a Site of Special Scientific Interest), designated for both its maritime heaths and geological features. There are also four Geological Conservation Review sites. Tintagel lies within the Cornwall Area of Outstanding Natural Beauty (AONB). Almost a third of Cornwall has AONB designation, with the same status and protection as a National Park.

We never thought we would be hunting seals in Tintagel but we are! The ancient seal of the Borough has disappeared.

This seal was last heard of in the possession of a Mrs.Symons of Bossiney about 100 years ago. The seal was used to impress sealing wax on to documents, and the mark was as shown. The handle consists of two acorns and oak leaves.

Has anyone seen the seal? 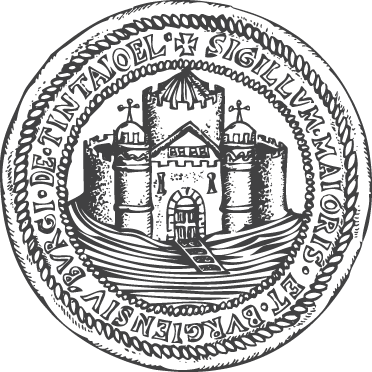